The Radiosai studio at Prasanthi Nilayam, Puttaparthi was abuzz with excitement and activity though it was Sunday, a weekly holiday. The Prasanthi Bhajan Group had gathered there for a special audio recording. The brightest stars from the galaxy of singers at Puttaparthi had descended to the studio for this venture. Each stalwart singer present had his own beautiful story of singing for Swami and the collective experience of the group is worth several books! Take for instance the story of Ravikumar and his Sai Bin Raha Na Jaaye or the love-filled tale of the Meera-boy Koustubh Pare; or there is the test of love of Sai Krishna or the sweet stories of Ashwath Narayan. This is just a sample!

The new and young members of the group were excited to just see these ‘stars’ in action. They knew that rubbing shoulders with these senior members would only enhance their own musical skills and experience. But it was not just the ‘music people’ who had gathered. Music lovers who had been given the chance to be present for the recording had turned up too. It is not daily that one gets to witness a recording of this kind.

But wait! What was it that was being recorded? The straight answer would be - Nada Brahmam.
All had assembled at the Radiosai audio studio for the recording of Nada Brahmam. 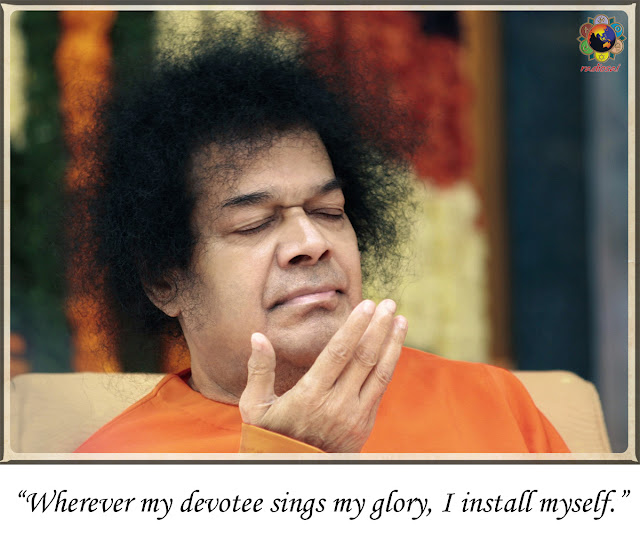 What is Nada Brahmam?

Radiosai had been spreading Bhagawan Sri Sathya Sai Baba’s love in the digital dimension for almost a decade now. In an effort to bring high-quality, audio-visual media into the home of the devotees, it started its products wing - Sai Blossom. One of the first audio products by Sai Blossom had been ‘Prasanthi Mandir Bhajans’, a recording of bhajans being sung in the direct presence of the Avatar of the Age. Though the audio CD had been received very well, the problems of making use of live-recorded bhajans began to show through. The audio levels of various instruments would not be evenly balanced across bhajans which would be recorded across several months. There were also some mistakes made by the singers or instrumentalists which could not be corrected.

That was when Radiosai decided to come up with special, high quality, studio-recorded bhajans in a new series. In the quest for the best possible quality, track recording was introduced. Each singer would be made to sing separately and each instrumentalist would play his piece on a metronome. Days would pass in taking different inputs from the chorus singers, the instrumentalists and the lead singers. Any mistake could be corrected. Thus was born the technically-perfect and musically-rich series called  ‘Bhavanjali’ (an offering of feelings). But even that was found lacking!

The ‘live-feel’ was missing. It was felt that though the melody and rhythm was perfect in Bhavanjali, the ‘feeling’ that is aroused in the heart of the singer and the instrumentalists during an actual bhajan session was missing because of the track-recording employed. What was needed was the perfection of studio recording, coupled with the feeling of an actual bhajan session. It was Prof.G.Venkatraman, the director at Radiosai, who came up with the brilliant idea of a new series - Nada Brahmam.


That advice had worked like magic and, in no time, Nada Brahmam had captured the hearts of tens of thousands of listeners around the globe! It was not as if every recording was flawless but it definitely oozed with something very divine. It was evident that Swami was keeping up the promise He had given as Lord Vishnu to sage Narada,
“Madh Bhaktaha Yatra Gayanthi Tatra Tishtami Narada “ (Narada, I install myself wherever devotees sing for me.)


A sneak-peek into the Radiosai studios during Nada Brahmam recording

A visit to Baba’s birthplace

It was a Monday morning and Ashwath Narayan, one of the Nada Brahmam singers, set out for his routine visit to the Shivalayam (translates literally into ‘house of Shiva’). The Shivalayam today stands in exactly the same place in Puttaparthi village, where the tiny house of Swami’s parents had stood decades ago. The shrine is popularly called Baba’s birthplace for it stands in the place where little Sathya possibly spent most of His childhood days. Ashwath had made it a practice to visit the temple every Monday morning. Monday or Somavar is considered as a special day for Lord Shiva.

Ashwath was momentarily caught off guard. He had not expected this old lady to know anything about Nada Brahmam. Gathering himself, he answered,
“Yes, I have sung in Nada Brahmam.”
Immediately, the old lady’s eyes brimmed with tears.
“Can you tell me who is the boy who sang the bhajan Giridhara Gopala?
(That bhajan is third one in Nada Brahmam Volume 1.)
Ashwath was now stunned and curious at the same time.
“Amma, I have sung that bhajan”, he said with utmost humility.

The old woman’s thrill seemed to have no bounds.
“Ah! This is exactly as Swami told”, she exclaimed.
She then took several packets of vibhuti and gave it to Ashwath Narayan.
“This is for all the singers of Nada Brahmam from Swami”, she said and began to walk away.
“Wait a minute granny”, Ashwath stopped her, “please tell me what is going on here. Why did you give me all this vibhuti?”

The lady began her phenomenal story.

The old woman hailed from the town of Ooty, located in the sylvan Nilgiri range of the Western Ghats in India. She was an indigenous tribal belonging to the Badaga community. It is believed that this tribe has inhabited the hills from 8000 BC! It is no wonder that the Badagu language has no script. Though simple in their living and unsophisticated in life, these people had communicated more than fluently with Swami through their hearts. Every time they came to Prasanthi Nilayam, Swami seemed to receive them with special love and concern.

In the year 2008, when they visited Puttaparthi, Swami blessed them to put up a drama on the life of Shiva’s devotee Markandeya. The happenings of that day is etched in the hearts of everyone who was present as Swami gave Himself totally to these simple folk. The same was the story two years later also when the Badaga people presented a drama entitled, “Satyavan Savitri”. It was after the drama on that day that Swami made a promise. Blessing everyone after the Arathi, He said, "I am very happy. Everyone acted very well. I will surely come to Ooty."

The Badagas seemed heart-broken when Swami seemed to leave the Physical without having fulfilled His promise. But does the Avatar need a body made of the elements to fulfill His word? He began to show His presence in the mandir at Ooty, Sai Kailash, in a manner that is nothing short of miraculous. 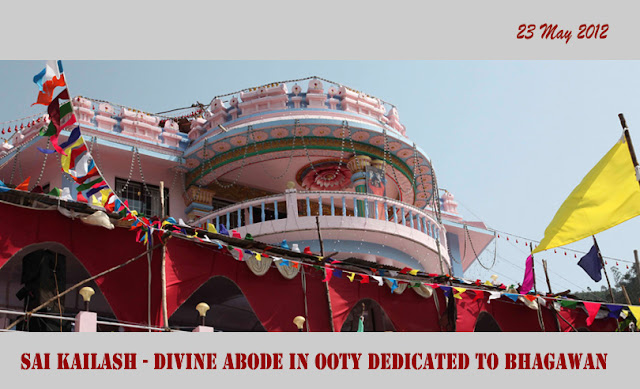 Apart from the materialization of profuse amounts of vibhuti and kumkum, Swami actually fulfilled His promise of visiting Ooty in the most mesmerising fashion. (Click on that link to read about it.)

This old lady (who gave vibhuti packets to Ashwath) had gone to the Sai Kailash mandir and had been blessed to witness several miracles there. When she sat for bhajans there, she actually heard Swami’s voice.

“What did Swami say?” asked Ashwath.
“He said that His boys were missing Him a lot and were feeling that He is not with them. He told me that they were recording Nada Brahmam for Him with a lot of feelings”, she replied, “I did not know what Nada Brahmam is. But Swami told me to take vibhuti and give it to all the Nada Brahmam boys.”
Now Ashwath could feel the joy surging in his heart. But the story was not yet complete. The old lady continued.
“I told Swami that I did not know any singer in Prasanthi Nilayam nor did I have any contact number. Swami told me to visit the Shivalayam on Monday. Ah! What can I say about His plans. They are always perfect!”

Ashwath went about his duty of distributing the vibhuti to all the other participants of the Nada Brahmam. It was such a boost for all of them because what they knew in theory had been proved practically to them. The Nada Brahmam recordings continue to this day and, as of date, ten volumes have been released.

In conclusion, Swami’s love for music is best summed by His own confession in the discourse on Krishna Janmashtami day in 2004 (September 6th).

There are several hymns in praise of God in the Rig Veda, Yajur Veda, Sama Veda and Atharvana Veda . But, not even a single individual chanting those hymns could obtain Divine Darshan. However, when these hymns are set to tune and sung with devotion, they could experience Divine Love. That is why God is extolled as ‘Ganalola’ and ‘Ganapriya’.

Pray to God via devotional singing. You can easily win the grace of God. Some people may have a doubt, “We cannot sing well; we have not learnt the art of singing. How can we please God?” Do not worry. You may not have knowledge of music or a mellifluous voice. It does not matter. Sing the glory of God with intense love, in some tune which you know. That is enough to move the heart of God. What is music? It is not necessary to make a special effort to learn music. A simple song with intense love and yearning will move God.


You may sing any number of bhajans and songs, but it is only when they are suffused with intense love, devotion and sweet and soft feeling (bhava) you will derive immense happiness and joy.

Also, use the Tweet and FB buttons below here liberally to share with your friends and family!
Thank you)
Posted by Aravind Balasubramanya at 8:06 am