A single leaf of the mighty banyan
Thousands have been the teens who have had the privilege of studying as students in the educational institutions established by the Avatar on earth. Millions have been the magical moments that they have enjoyed with the Lord in human form. Infinite have been the insights that have been derived from these experiences with Bhagawan Sri Sathya Sai Baba. Yet, each new episode is interesting to hear because it is unique in its unfolding. It is any surprise then, that the Lord has been described as Nitya Nootana (ever new)?
Among the billions of pages in the millions of chapters in the book of His-Story there lies hidden the soursweet experience of little Vijayshree. Though the word ‘soursweet’ is defined as ‘being sweet and sour at the same time’, there is a reason why the word ‘sour’ comes first and ‘sweet’ comes next. That is because where God is concerned, things might seem to get sour but they always end on a sweet note. That is precisely what happened with Vijayshree. This is the story of how she became a Sai-student in Swami’s Primary School.
Vijayshree happens to be the great-granddaughter of Smt. Venkamma, the ‘elder sister’ of Bhagawan Baba. (The only reason why the relationship is in single quotes is because Swami always identifies with everyone as fellow-sparks of the same Divine Principle.) Venkamma enjoyed the privilege of personally taking food up to Swami’s room, serving Him and waiting upon Him until He finished eating. Vijayshree, barely four years of age then, enjoyed the privilege of occasionally accompanying her great-grandmother on her visits to Swami. It was in the year 1992 or 1993.

The mischief and its result

Though Vijayshree accompanied Venkamma, she never went up to Swami’s room with her. She would wait downstairs, playing by herself on the cement floor under the mighty tree that stood on the west side of the mandir then.
That day, Vijayshree was at her mischievous best and irritable worst. She began to scream and create a ruckus even as Swami was having His lunch upstairs. The shrill voice easily travelled till Swami’s ears. Even as He was about to put a morsel of food into His mouth, He stopped and asked Venkamma,
“Venkamma yevvaru anta allari cheastannaru?(Venkamma, who is making so much noise?)”

Click to read complete article »
Posted by Aravind Balasubramanya at 8:03 am 5 comments:

Shraddha and Saburi - Ganesh's experience about the prerequisites for devotion

Eighteen year old Ganesh enrolled into the Brindavan campus of the Sri Sathya Sai Institute of Higher Learning for the Bachelors course in Chemistry. Little did he realize that his pursuit for higher learning would transform into a pursuit for the highest yearning and would lead him to learn the highest pursuit in life. He did not imagine that along with a 3-year Bachelors course, he was also being enrolled for a lifelong internship in internalizing Divine love.

The Summer Course in Indian Culture and Spirituality was beginning and every student joining the hallowed portals of the University had to compulsorily attend it. Thus, for the first two weeks, of his life as Swami’s student, Ganesh was showered with daily discourses of Bhagawan Baba. Apart from those, he was also blessed to hear many talks and satsangs by scholars, devotees, people of eminence, teachers and senior students of the University. What he heard enthralled and excited him. He kept awake late in the night replaying to himself all the wonderful things he was listening to.

But grasping God, Swami, by listening to narratives about Him is like trying to understand the magnificent oceanic depths by standing on the shore. While one gets a sweeping view of the immensity, to truly understand the beauty, grandeur and tranquility of the ocean, one has to dive deep into it. However, listening to a devotee extol the Lord is also akin to listening to a restaurant waiter passionately describe a delicacy. It prods the listener to quickly seek that, which is being described! That is exactly what happened to Ganesh.

The more he listened to the leelas, mahimas and experiences divine, the more he thirsted to experience Swami directly and His Divine Love. It was not a passing desire or a comparison-game where he wanted to be in the position of others. It was a genuine urge to experience the Divine acknowledgement that his Swami was omnipresent, omnipotent and omniscient. And so, Ganesh began to silently yet intensely pray to Bhagwaan. Several days passed in this manner but no experience seemed to be forthcoming. One day, Ganesh just happened to come across a quote by Baba,
“Take one step towards Me and I will take a hundred towards you.”

He instantly knew what the problem was - he had not taken the first step. He prayed to Swami and immediately took a sankalpam (resolution),
“Swami, I will read the fifty chapters of the Shirdi Sai Satcharitra (the holy story of Shirdi Sai) over the next 50 days, one chapter daily. It is said that when one completed the reading of the Satcharitra, one’s prayer is answered.  All I pray to You is this - bless me with the gift of a Divine experience. I have heard several experiences from students, teachers and devotees but if you grant me one personal experience then my Faith will become firm forever!”


He knew what Swami had once told a devotee in this regard. In spirit it went like this,
“If you are praying with the objective of developing faith, you are allowed to put conditions and test Me. I will satisfy all your conditions and grant you that faith in Me. But after I have satisfied all your conditions, if you put one more condition, then you will become a ‘Doubting Thomas’ for life and suffer in your self-created ignorance.”
However, Ganesh had not made a prayer with this intention to test Swami, challenge Him or sign a contract with Him. It was simply a humble plea of a boy who was thirsting to taste the nectar of His Divine Love and was ready to do anything for that sake.

Click to read complete article »
Posted by Aravind Balasubramanya at 8:45 am 10 comments:

A new dimension - the story of Adam Ant in Flatland 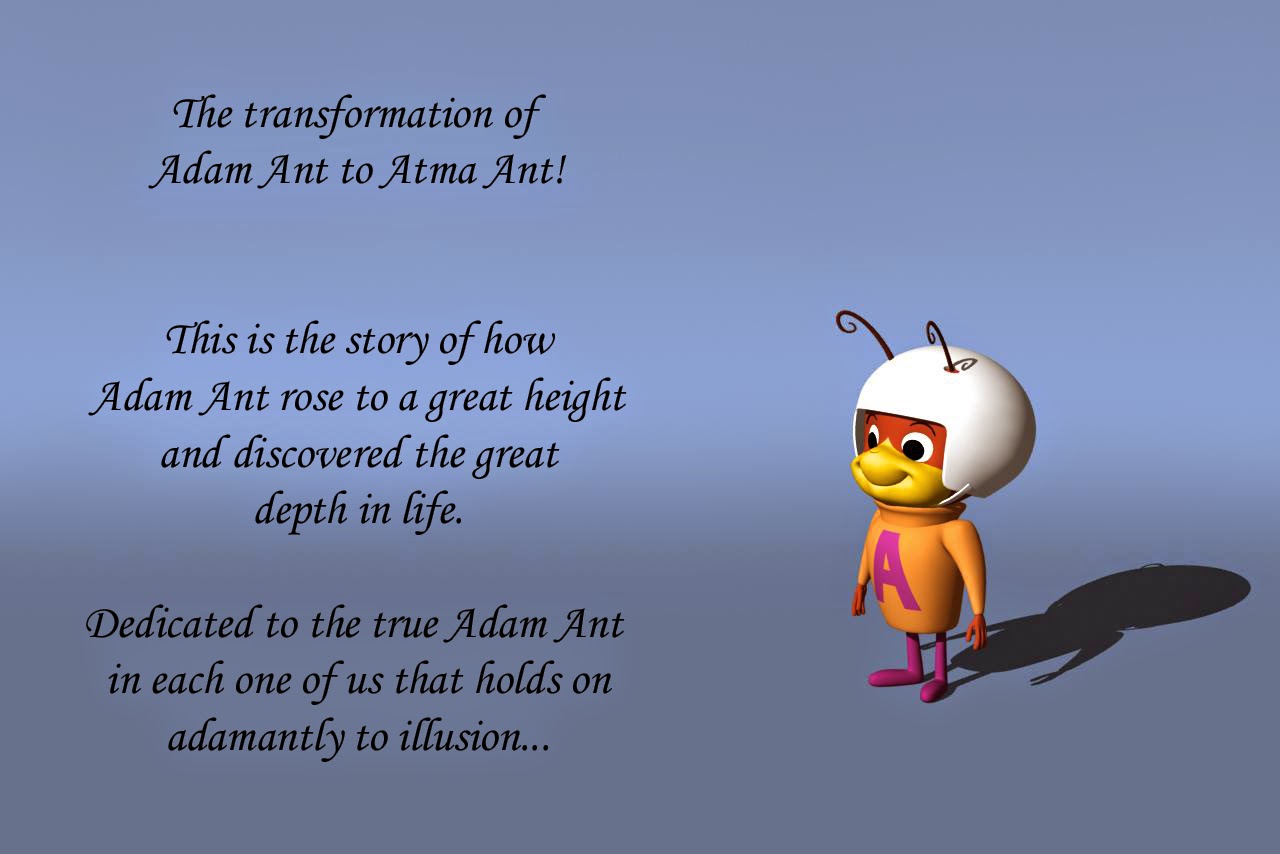 Flatland was home to billions and billions of ants of all kinds - large ants and small ants, black ants and red ants, running ants and flying ants, biting ants and stinging ants. However, apart from being the biggest ant colony in the universe, there was something else unique about Flatland. As its name suggested, everything there was absolutely FLAT - in just two dimensions. Not that it mattered to the ants. They went about their daily life without being affected in the slightest manner by the fact that their colony was flat as flat could be.
After all, the only directions that matter for an ant are forward and backward; left and right, right? An ant never knows or understands the concept of above and below. Even when it seems to be climbing ‘up’ a wall, as far as it is concerned, it is moving forward and has options to move in three other directions - right, left or backwards after executing an about turn!

And so, the Flatland ants were as happy as happy could be with their two dimensional world.
Among the other billions there, lived Adam Ant. Adam was the most determined, dedicated and dutiful ant in Flatland. Attending to his duties sincerely, he was also ever ready to lend a helping hand to anyone that needed it. It was this trait of his that made him meet Mendik late one evening.


A friend in need

“Help me... Please help me...”
Every ant heard the cry but they were all too busy to notice. It was only Adam who paused to see who was seeking help and why. He looked to his left and right. Everything seemed fine. Shaking his head, he began to walk away when he heard it again,
“Help me.. I am in pain...”
Adam looked ahead of him. He just saw the behind of the ant ahead of him. He turned around only to come face to face with the ant behind him. Where was that cry coming from?

He stepped out of the line and looked all around. Nobody seemed to be in pain or distress. As he turned to join the line, he heard that voice yet again.
“Don’t leave me like this...”
Now he grew all antsy. He had searched everywhere. There was only one place from where the cry could be emanating from - within him. But could that be the case? Adam closed his eyes and sought to discover the origin of that voice.
“Who is this?”
“I am Mendik... Mendik Ant.”
“But where are you? I can’t see you anywhere...”
“Oh! What shall I say? Though you cannot see me, I am everywhere!”
“What?”
“Hold on... Just a moment now...”

Then and there, right in front of his eyes, Adam saw the miracle. A fellow ant materialised right before him, from thin air!

Click to read complete article »
Posted by Aravind Balasubramanya at 9:29 am 9 comments: