The whole road leading out of the airport had been decked with Rangoli designs and flowers were spread beautifully all over the place. A host of children with welcome banners and boards awaited the divine arrival. As the car headed towards the main gate, we saw a set of children holding out placards, each with a letter, such that all of them together read as “WELCOME SAI”. We moved about taking some shots but very soon, we heard the news that Swami was landing. At exactly 11 am, the little aircraft landed on the airstrip. It had a magical effect on the crowds waiting outside. People began to shout jai jaikars and at random they began to sing bhajans aloud. These were all Swagatam bhajans and there was no mistaking the celebration that was ringing all around. The thrill that these devotees expressed was beautiful to witness.

Though we tried our best, CG and I were not let into the airport premises. This was inspite of the vociferous and heartfelt appealing that Arun Jain sir did on our behalf. The security seemed quite tight and adamant. The formalities of landing and Swami getting into His car took hardly 10 minutes and soon, Swami’s car was moving towards Anand Vilas, the Divine residence that had been built in Simla. It was after more than 3 decades that Swami was visiting this place. The present visit was the fulfillment of the promise that Swami had made in the April of 2007, via a letter addressed to the devotees of Simla. 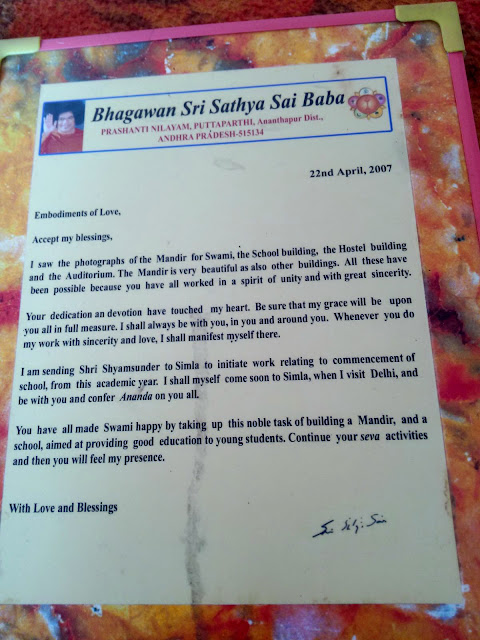 When He had last visited, He had freely roamed the place and devotees had been thrilled with close darshan. He had walked barefoot in many places in Simla and surrounding areas. (In case you wish to view some unforgettable moments from the 1973 visit, pick a copy of ‘Love Flows North’.)
Click to read complete article »
Posted by Aravind Balasubramanya at 9:28 am 4 comments:

90th birthday gift
Ever since the 89th Birthday celebrations of Bhagawan Sri Sathya Sai Baba, my dearest Swami, I was contemplating on a gift that I could give Him for His 90th birthday. With my little understanding of my Swami, I knew that something that would make the others happy is the only gift He seeks. It was this very understanding that had inspired me to write two books detailing my experiences and learning at His lotus feet. While ‘Memoirs of a Sai Student’ had been my gift to Him in 2013, ‘Capturing Divinity’ was gifted to Him in 2014. (Today, I know that these books have actually been His gifts to me rather than the other way round. But coming to think of it, can we ever gift anything to the Master when everything already belongs to Him?)

I had noticed that the joy derived from experiences with Swami increases when it is shared with humility and love. In fact, the listener/reader also partially experiences the same joy that you had experienced. The joy that so many loving members of the Sai-family (the global family that we have been gifted because of the common bond of love for Swami) conveyed to me, convinced me that my gifts to Swami had been appreciated by Him.

For the 90th birthday, I wanted to gift something more special. I was thinking on what I should do throughout the year because, unlike usual birthday gifts, one cannot ‘buy’ a ‘gift’ for Swami a few days prior to the D-Day. Since the Lord sees the purity, intent and effort behind the gift, in my humble opinion, the gift must be a persevering effort culminating on the Birthday. I had already offered two books. Wouldn't He be bored receiving the same gifts year after year? What else could I do to make Him happy? These were my prayers and thoughts.
Before I could think of anything else, it seemed as if Swami wanted to reinforce the idea that I must do something to make others happy in order to make Him happy. That happened in a very ‘coincidental’ manner via the Birthday theme audio created by Radiosai. The theme starts with Swami’s sweet voice saying,
Prema Swaroopulara,
Happy Happy Happy; Be happy.
Happy Happy Happy; Make others happy
All will be happy, then God will be happy.
So that was decided. The question remained - what should I do to make others happy which would in turn make my Swami happy?
A moment of silent introspection later I got my answer.

Click to read complete article »
Posted by Aravind Balasubramanya at 8:33 am 6 comments:

An impossible luncheon with Swami becomes a reality

At the end of the drama, all the children came together for the final formation after which Swami moved from His perch on the mini platform. Blessing all the children, He moved down and headed for the car. The principal invited Him to bless the school building. She was quite insistent and Swami seemed to yield to her entreaties. There were rows of girls holding glasses of water and sherbet for the guests. Swami entered the school building, moving towards an outdoor hydraulic lift which had been temporarily erected to take Him from the ground to the first floor. It was an open lift and the distance to be covered vertically was quite a bit.


Grating and grunting, the lift began its slow ascent to the first floor. Meanwhile, all the boys were instructed to get into the cars, ready to return to the International Centre where lunch had been arranged. Swami would not be having lunch with us because He was scheduled to visit the homes of some senior devotees in the afternoon. CG and I however, using the license of cameramen, tailed Swami. Swami moved through the corridors and looked into one or two classrooms whose walls were filled with posters and charts made by the children. Swami then entered a hall where tables had been laid out and a banquet had been arranged! Swami went straight to the table that had was laid out for Him. Even as food was served to Him, He asked for the boys. Ah! What a feeling it was to see God seek us. I had thought that this would be a day when we wouldn’t be dining with God because of fate but Swami had slightly twisted destiny to accommodate us!


I rushed out to the cars and called all the boys to come in. Even as I was calling, I was being told that the ‘instructions’ were to return to the International Centre. I said that when Swami says anything, all instructions get overruled. Some boys were still hesitant and continued to sit in the car. I decided that whoever was ready to run up, should leave. At this point, Satyajit also came out and called everyone inside. In an instant all car doors opened and the boys streamed out in a hurry. I realized what power and influence Satyajit had because everyone felt that his instructions were Swami’s instructions. Mine too had been Swami’s instructions - the SAME instructions - but didn’t have the same effect.

Another programme at the Dwarka grounds

By 3:00 pm we were back in our rooms and we decided to rest a bit extra. Since the morning session had got extended quite a bit, we were quite certain that the evening session would be delayed . Thus, all of us got ready leisurely by 4:00 pm. We were being pampered with such rich food and such service from the volunteers that, I felt, each day I might be putting on half a kilo! In that light, it was amazing that Swami, after so many years of such treatment, still maintained His figure and weight! I understood better the meaning of absolute control over senses and not falling victim to the taste buds.

It was nearly 4:50 pm when Swami came out of His room in the evening. We were all assembled in the lift landing area and as soon as Swami told us to move in, we went in for tiffin. As Swami sat at the table, He enquired as to what the programme today was. AIP was a bit hesitant to mention the evening’s programme at the Dwarka grounds after it had been cancelled yesterday. Thousands had gathered today also at Dwarka grounds and it appeared as though AIP wanted to somehow push it through today. He said that there was a Bhangra programme and that would be followed by the Sufi singer, Hans Raj Hans.
“After that, we can have the boys programme”, he quickly added obviously hoping that the addition of “boys programme” will make Dwarka grounds more attractive for Swami.

Swami then looked at Ashwath and P.Sreenivas and wanted to know the programme. They went to Him with a list of the songs they had planned to sing. Swami saw through the list and He seemed particularly interested in Rama Nannu Brovara. Seeing that Swami had permitted these boys, AIP was very eager have the evening programme frozen. So he went to Swami again, “Swami, firstu Bhangra dance chestharu........tharuvatha, mana pillalu...” (Swami, first they will do Bhangra and then... our boys...”)
He stopped, trying to formulate the next part of his sentence after seeing Swami’s response. Swami looked at him and continued, “Mana pillalu...? Dance chesthara?” (Our boys? Will they also dance...?)

All burst out laughing. That ensured that the mood was light and nice for the AIP too as the tiffin session concluded. Swami told all of us to wash hands and get into the cars. Thus began the long journey to the Dwarka grounds. The convoy was given VVIP status and clearance. In spite of that, we took almost 40 minutes to reach the venue. Just made me wonder as to how the traffic had grown in the Capital city! The traffic was so heavy that the cars that were in the latter half of the convoy got cut off and were left behind. It was a totally Toyota convoy - Toyota Corollas and Toyota Innovas being led by the Toyota Estima! I took quite a few convoy shots in the fading light of the evening.

It was almost 7:00 pm when Swami arrived at the Dwarka grounds. The artiste for the evening, Hans Raj Hans, was standing with a rose to welcome Swami. As Swami came out of the car, a seva dal member offered a rose to Him. Then the artiste came forward and bowed to Swami. Swami seemed so happy seeing him and He blessed him with a beautiful smile. He accepted the rose and gave it back to Him. Swami moved to the upper stage. On the lower stage, the one on which He had sat watching the drama, a group of lads performed the bhangra dance to mark the occasion of Baisakhi. Personally I felt that the dance was slow and without much vigour, but then, the Lord always sees the efforts made rather than the results produced. The dance lasted about ten minutes.

Once the dance was complete, at about 7:20 pm, the singer took centre stage. He offered his gratitude and salutations to Swami before he began. The performance was a memorable one for both the singer and the audience. The Sufi songs were profound and rich with meaning. The flautist who accompanied the singer did a phenomenal job. In the beginning, I felt thrilled listening to the meaning and power of the singing. But after a while, it became a little repetitive and monotonous. The whole performance lasted a bit more than half an hour and after that, Swami called the artiste.

Click to read complete article »
Posted by Aravind Balasubramanya at 9:03 am 2 comments: