By the love and grace of Bhagawan Sri Sathya Sai Baba, many opportunities have come my way to address the youth from many countries. It is a great privilege to be able to share thoughts, ideas and ideals with this reservoir of great potential - the reservoir that will be sustaining the society and world in the future days to come. My observation has been that though the themes of the different conferences, meets, study circles and satsanghs may vary greatly, the questions and problems that the youth face fall broadly into just 3 themes. These are:

Imagine my joy when, while flipping through the pages of my personal diary, I came across an unexpected episode that happened on the 2nd of March, 2010, in the direct physical presence of Swami, which provides many insights on this very sensitive theme of dating and marriage! I felt a thrill in my heart because I realized this was Swami’s way of helping me and, in turn, all those that have questions and doubts in this regard. So, with deep gratitude and prayers, I shall take this nostalgic ride down memory lane, to the day when Swami amazed the whole of Sai Kulwant hall with His seemingly childlike actions. Though it is very tempting to fast forward and rush to the Divine delight that drenched the devotees, it is only fair that everyone be allowed to participate in the day as it unfolded. And so, we begin from the beginning. 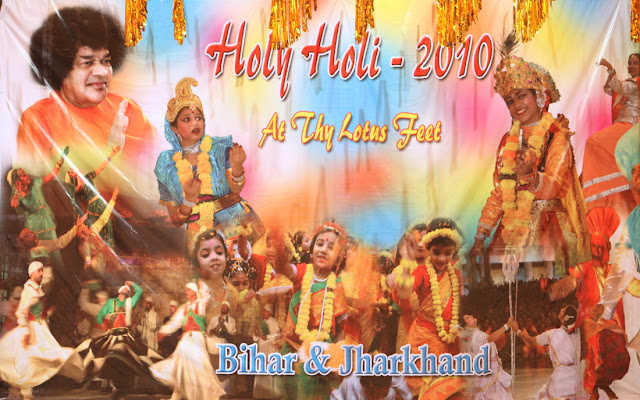 In the beginning, there was nothing...

That is how the history of the universe begins; that is how the Parthi Yatra (Parthi Pilgrimage) began for the devotees from the Indian states of Bihar and Jharkhand began. They had come prepared with multiple cultural programmes to be put up the Divine Presence on the occasion of the festival of Holi. Holi was on March 1st but to the great disappointment of the pilgrims, even as the clock showed 06:30 pm and the bhajans were on in full swing, there was no sign of Swami coming. It was a sort of anti-climax because on the previous 5 days, Swami had granted darshan in the mornings as well as evenings. The day ended without even a single darshan. Holi didn’t turn out to be so holy after all!

The Lord has His reasons and those are beyond the comprehension of us mortals. On the morning of the 2nd of March, Swami told the pilgrims that He would see their programme in the evening. The devotees from Bihar and Jharkhand began preparations in right earnest and with sincere prayers. Many cancelled their return tickets to stay an extra day in Prasanthi. Soon, the backdrop was in place and the children were ready in costumes. As was the practice, Veda chanting began at 4:30 pm and concluded at 5:00 pm. But well, as said earlier, in the beginning there was nothing! Nothing in terms of signs of Swami's arrival.

Then there was the Word! The word was with God; the word was God! It was at 6:30pm that there was word of Swami's arrival. And then He came!


A happy and colourful Holi programme

There was a garland of dances in celebration of the colorful festival of Holi. It began with a traditional dance by little girls seeking Swami's blessings by way of a visit to Bihar! The next one was by the boys and was tuned to the famous song from the Bollywood movie, Chak De India, "Maula Mere Le Le Meri Jaan." The boys sought Swami with all their heart as the lilting melody filled the air. As Swami started keeping rhythm to the song, one could not help but think of the good fortune of the singer and composer. It was a song to the Lord and it had found fulfillment today. The singer and composer were possibly unaware that the Avatar was listening to them! It only goes to show that anything done with the heart ultimately reaches Him - in one way or the other.

The next dance was done by girls dressed in multi-coloured lehangas as they brought of the various hues of feelings on the Holi day. The fourth dance was a piece in Bhangra and the song had been specially composed for the occasion of Holi. The culminating dance depicted the Holi celebrations in Brij, the childhood place of Lord Sri Krishna. It was a beautiful sight to imagine the Lord playing with water and colours with his beloved devotees, the gopikas and the gopalas.

As the dances concluded, a drama titled Sita Kalyanam (the wedding of Sita) was announced. Swami's eyes seemed to light up even at the announcement. This was where He had planned His gift for everyone assembled (and the whole of humanity too).

The drama opened at the hermitage of sage Vishwamitra whose sacrifice had been protected by the brothers Rama and Lakshmana. The invitation to attend the Svayamvara of Sita comes and the brothers head towards Mithila at the command of sage Vishwamitra. There, Lord Rama breaks the great Shivadhanush (bow of Lord Shiva) and then wins Sita's hand in marriage. However, just before Rama broke the bow, Swami turned to the side and told the student there that He wanted to leave! As per His command, He was taken in as the drama went on.

Within the next 5 minutes, the holy wedding of Lord Rama and Mother Sita took place and the drama concluded. A few minutes after that, Swami came out of the interview room and a drama of an entirely different nature began.

Swami summoned the State President (SP) of the SSSO (Bihar and Jharkhand) and asked whether the ‘wedding was over’. He replied that the drama had been completed. Swami said that He wanted to witness the wedding and so, the SP rushed to re-play the drama CD from the point where the wedding would begin. Even as he left, Swami looked and called me. Then began a series of unforgettable instructions which I got the opportunity to convey, running down and then back up to Swami!


The Veda chanting was restarted and was going on in full force. Veda Narayan sir, Praveena sir and the other stalwart student chanters opened up their hearts and throats! Swami wanted Rama and his entourage to be on one side while Sita and her entourage was to be on the other side. It was made clear that the CD should not be played and this drama would be directed by Swami. The father of the bride, the emperor Janaka, was asked to bring in the bride from behind, away from the sight of Rama. Rama stood seeing Swami and nobody else. All the elders (who were not part of the original drama) were asked to assemble on the stage to shower blessings on the couple! Thus, the SP and other elders from the states of Bihar and Jharkhand became participants. I was personally on cloud nine because I knew that I had been chosen as the ‘organiser’ for the Sita Kalyanam!

Now, Swami began to supervise the rituals of the wedding. The bride and groom were seated next to each other as the Vedic chants in Kulwant Hall pronounced blessings of a long and peaceful life on them. All the elders were made to shower Akshatha grains on the couple as their blessings. Then, holding fistfuls of these grains, Rama and Sita poured them on each others head as per the custom. Then, Swami asked for one end of Sita's saree to be tied to one end of Rama's dhoti. That was done and then the couple were asked to move thrice around the bow of Lord Shiva which seemed to take the place of the holy fire! The whole hall watched in spiritual rapture as this grand spectacle was conducted by Swami.

Swami then asked the Vedam group to chant the "Mangalyam" - the holy chants which are sung during the marriages. The Sita Kalyanam is the reminiscence of a sacred event of the distant past which celebrates the day Sri Rama and Sita entered into matrimony. It is considered highly auspicious and one need hardly say that the auspiciousness had been multiplied infinitely once Swami took charge. Swami asked for the thrones to be placed in the center and asked Rama and Sita to be seated. Swami now asked for the bhajans to begin and bhajans celebrating the union of Rama and Sita, of Prakruti and Paramatma, the individual soul and the Supreme soul, were sung. At this point, Swami moved down from the stage and then posed for photographs with Rama and Sita.

On that day, I was lost in the bliss of being a participant of the glorious event going on. Today, looking back at that episode, so many thoughts are inspired within.

Those were the thoughts regarding marriage that arose in me as I travelled to that beautiful day in 2010. They are in no way comprehensive but they definitely give us a lot of food for thought. We haven’t covered what Bhagawan says on how one should live harmoniously with one’s partner. That will possibly be the subject of a separate piece.

In conclusion, I shall possibly recount one more interesting happening that day. In the end, Swami came down the dais and posed for photographs with everyone. He wanted ‘Rama’ to stand on side and ‘Sita’ to stand on the other. They were unable to do it because they had been ‘tied’ to each other. But since this was Swami’s wish, they quickly untied the knot and stood by His sides. Everyone smiled as the photos were taken.

Looking back to that day, I first thought that the only justified reason for a ‘breakup’ is when it is for God and God alone. I thought that should be the 'part'ing message when a loving Sai-uncle sent me a message that thrilled me. He said,
"If married couples keep Swami as the centre of their lives, then they don't need the knot also to keep them together."

Now, that is a fitting finale I feel, for, after all, isn't Union with Him the ultimate goal of every earthly union?

For all the readers:

(If you enjoyed this and wish to subscribe to this blog, please go to the right hand side and choose the last 'box' which says subscribe. There are hundreds of other articles in this blog too. Please have a look at them. Another blog which I maintain with more than 180 articles on it is at http://aravindb1982.hubpages.com.

Posted by Aravind Balasubramanya at 8:05 am