Slow Miracles are also miracles - an experience with Sathya Sai

When I think of a miracle, the words that come to mind are along these lines - unimaginable, stunning, fast, mind-blowing, unbelievable, happy, unnatural, mysterious, extraordinary. I am sure that the list is much larger but this sampling of words is sufficient for my present context.  Among these words, in my opinion, a key one is ‘fast’. A miracle has to happen suddenly and fast. Then only will it be ‘unbelievable’, ‘extraordinary’, ‘mysterious’ and ‘unimaginable’. If it does not happen fast, then I don’t consider it a miracle. Speed is of essence here.

A magician puts a seed into a pot and covers the pot with a cloth. He pulls away the cloth mumbling some abracadabra and presto! There is a flowering plant. I applaud hard for him. Yet, when the same thing happens over the span of a few months in the pot in my balcony, I hardly notice. Sometimes, I don’t even pause to admire the beauty of the multi-petalled jasmine or enjoy its rich fragrance. It is all my obsession with speed. I give so much importance to speed that I applaud its presence in a magic show though I know what is happening is false but I refuse to acknowledge a true miracle of God in my balcony!

God can do things in a trice but He is not obsessed with speed! Sometimes He does things real fast; the other times he does it slow. Do I miss out on miracles in my life just because they happen slowly? I am convinced that is the case because, looking back at my life with Bhagawan Sri Sathya Sai Baba, I am slowly discovering several slow miracles that have happened. And I thought that sharing one such miracle would be my way of expressing gratitude to my Swami.

When I joined the Sri Sathya Sai Higher Secondary School in 1998, like many other students, my sole aim was to gain the physical proximity and blessings of Swami. One of the ways in which I intended to achieve my goal was through photography. I had been blessed with a good SLR camera thanks to my dad and I intended to put it to good use in taking me closer to my Guru and my God. However, there were multiple obstacles to this plan of mine.


Click to read complete article »
Posted by Aravind Balasubramanya at 9:14 am 14 comments:

I am God and You are God - Swami's core teaching

I remember watching an action thriller movie by the name, “The Bourne Identity”. It was the story of an amnesiac (person suffering a memory-loss) who attempts to discover his true identity. He has many special skills, talents, abilities and a super intelligence. Yet, he has no idea about who he is, where he came from and where he should be headed to. He keeps living in the world, enjoying many successes and the love of a companion while constantly trying to avoid the pitfalls, problems and plots against him. More importantly, he is also trying to find out who he is and where he came from using all his abilities and intelligence.
The movie was indeed a ‘thriller’ for me as it thrilled me in more than one way! Of course, the action and the unfolding of the plot kept me gripped but even amidst that tension and drama, my dear Swami inspired a thought from within.
All of us are like the protagonist in that movie. We have our own set of special skills, talents, abilities and intelligence. But, we have no idea of where we have come from, where we are going to and who we are. We have become amnesiacs in that respect! We too should take inspiration from the protagonist and utilize all our skills, abilities and intelligence in finding out our true identities. More often than not, we use them to just to deal with day-to-day living and forget all about the quest. Seeking the reality should happen at least in the theoretical and intellectual level before becoming a part of our being!

That is why Bhagawan Sri Sathya Sai Baba often stresses,
“Education should be for life and not for mere living.”


It was during one of the famous Trayee Sessions at the Brindavan Ashram in Whitefield (Bengaluru) that the following episode took place.

Swami entered the jhoola room (the room where there is an ornate swing on which Swami sits). Even as He walked in, it appeared as though He was lost in thought. After a while, He looked at the students and asked,
“Do you all believe that I am God?”

Sitting among the students, I wondered what sort of a question this was -
"Was the Lord in doubt? He has been the one who has always encouraged me to develop Self-confidence and He is asking this question today?"
These were the foolish thoughts that cross a deluded mind and mine was in total delusion. I joined the chorus of all the students as we screamed out,
“Yes Swami.”
Swami seemed to feel a little better. And then, He made a second statement which was like another question for us...

That was more of a statement than a question and we all responded in the same enthusiasm and energy,
“Yes Swami.”

In an instant, Swami said,
“All of you are also God.”

There was pin-drop silence. Everyone just looked at Him. There was no resounding, “Yes Swami” for that statement. We 'believe' Swami is God and 'believe' that all His words are the 'Highest Truth' but can simply not digest it when He says that we are no different from Him!
When I look back at this incident today, I feel that Swami might have been disappointed with us that day!

Believing we are God - the 'gravity' of the situation
Swami's core teaching is the fact that everyone is divine. When asked about whether he was God, Swami replied,

“Yes, I am God and so are you. The only difference between you and I is that while I am aware of this fact, you are not.”

However, we do not seem to accept this Truth. We find it difficult to ‘believe’ that and so, life which was meant to be a beautiful dream of the Lord, turns into a nightmare!

But wait a minute! What is the big deal in believing we are God?

There is a HUGE deal in fact! That is because, whether we believe it or not, the fact remains - just like the working of gravity.

There was once a person who pooh-poohed gravity saying that he did not believe it existed. However hard anybody tried to convince him with theories and experiments, he was simply not ready to believe in gravity's existence. A wise man told him to step of the terrace of a tall building for he did not believe in gravity. The ‘hero’ backed off! Whether one believes in gravity or not, it exists and works. So too, whether we believe in our divinity or not, it works and every thought that arises in us is indeed the Vajra Sankalpa.Our will is as powerful as the Will of God for it is indeed the Will of God! 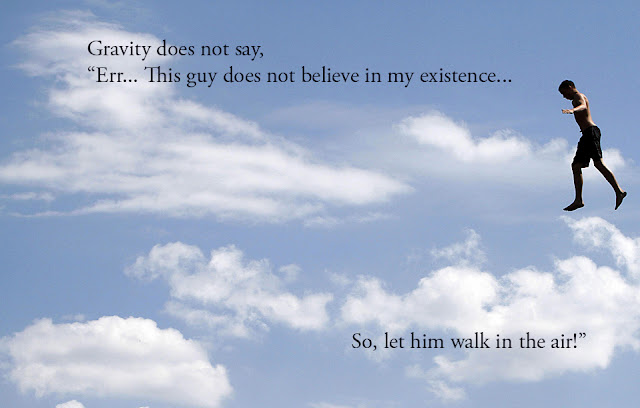 And THAT is the greatest secret of life!

Now we see the practical implications. Every time a negative thought arises in our head, we are actually God willing something negative. Though it is only the positive that we seek, we end up thinking negative. For instance, we want to have good relations with everyone around and do not want to hate or abhor anyone. However, when a ‘marked’ person comes close we start thinking,
“Oh my god! Here he comes. I know now he is going to irritate me!”

And when the outcome happens just as we thought, we feel that though we seek good, we end up with bad. It is not the intent but the content of our thoughts that matter. For our thoughts are the thoughts of God!

My mind instantly flashed back to the 21st of July, 2008. It was the second day of the Educare conference in Prasanthi Nilayam, Puttaparthi. Swami had granted a very special opportunity for the participants to ask questions of Him. He would answer them personally, He had promised. The first question and answer was in itself sufficient for life, nay lifetimes together.

1) For students, what is the way to have a relationship with God?

Ans - Why students alone? God is in you. Live in Love as one with God. It is only when God is considered as separate that you need a relationship. He is not separate. God is in me and is me. Have this identity firmly entrenched in your being.

And that is our ‘Born’ identity - So Hum! 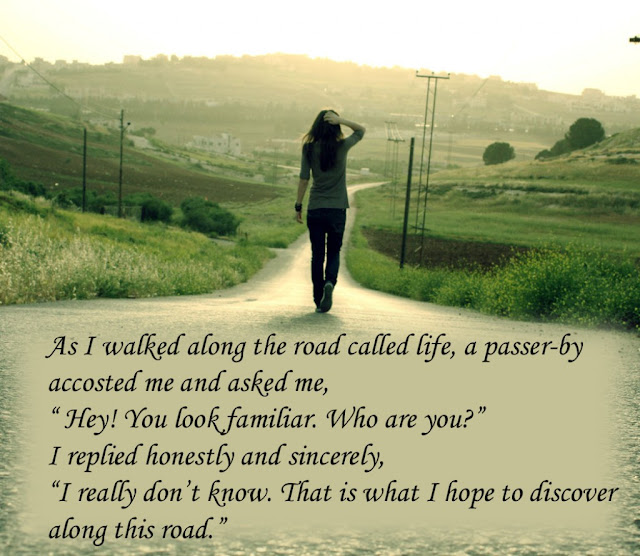 If you enjoyed this, here are another article on the same theme. It is about the day when Swami, the Lord, prostrated to His devotees!

For all the readers:
(If you enjoyed this and wish to subscribe to this blog, please go to the right hand side and choose the last 'box' which says subscribe. Another blog which I maintain with more than 200 articles on it is at http://aravindb1982.hubpages.com. If you wish to be added to my mailing list, please email me via this page with the subject "ADD ME TO MAILING LIST".


Also, use the Tweet and FB buttons below here liberally to share with your friends and family!

Posted by Aravind Balasubramanya at 8:27 am 11 comments: