Can we understand His words?

Bhagawan Sri Sathya Sai Baba left His physical frame on the 24th of April 2011. When that happened, there was widespread disbelief among the devotees. According to various public instances and references, Baba had said that He would be in His physical frame till 92, 94 or 96 years of age with the ‘96-years’ concept being the most popular version. How then, could He leave at 85? Thus, came the ‘theories’ of a second coming, a return to the physical of Bhagawan Baba. Then came the compilation - Sai, Thy Kingdom Come - by S.Narayan which brought together all the different things Bhagawan had said about the ‘length’ of His life. It presented evidence from the various scriptures, Nadis and the like while proposing a second coming. It also presented dreams and visions of different devotees that suggested Swami's second appearance as evidence. I must say, it felt really wonderful reading the same.

However, whenever I read, heard or came to know about different accounts regarding His second coming, a voice from within kept persistently throwing up a single statement which Bhagawan often made - a statement so poignant and profound that one could meditate for long just on it. This was the statement of Baba that my heart kept showing me,
“When you cannot understand my silence, how will you understand my words?” 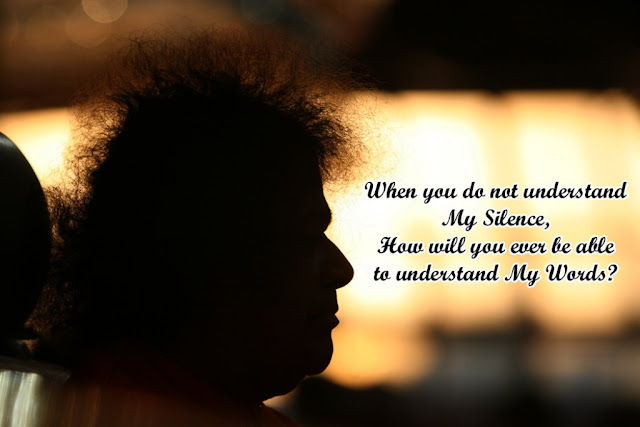 The Mahasamadhi was a black swan event and it was chosen by the Avatar of the Age definitely to communicate several messages of wisdom to mankind. One of those, I firmly believe, is to prod us to start listening to and understanding His silence. Instead of doing that, if we start discussions and debates on when and how He will start 'talking' again, aren't we missing the whole point?

The Divine Word is the Veda Vakya

God’s words are always the TRUTH. In fact, a Vedic scholar was once asked,
“Swami keeps telling various things about what is in the Vedas. Are those things really present in the Vedic texts?”
The scholar, Sri Kamavadhani, replied emphatically,
“Fool, Swami’s Word itself is the Veda!”
According to him, Swami’s word defined the Vedic word and not the other way around. It was not the case of checking whether what Swami spoke was the truth or not for His speech defined the Truth.  His first name, Sathya, means Truth and the Universe realigns itself to follow His every utterance.

So, don't get me wrong. I am not disregarding even slightly the words spoken by Swami. What I am pondering is simply about our ability to understand those words. There is the story of a sage undertaking a penance for centuries in an attempt to understand the Vedas. At the end of it, he realizes that if the Vedas were the four mountains, his understanding has been equivalent to a grain of sand! These are metaphorical stories to indicate that when it comes to divinity, the intellect and the mind are grossly inadequate in imparting an understanding. That understanding lies in the realm which is beyond the mind and the intellect.

The debate here is not about what Bhagawan said, but of our understanding of what He said.

The drama ‘Daivam Manusha Roopena’ (presented by the 11th grade students on March 29, 2007) was on the life of Shirdi Baba. When the scene of Shirdi Baba leaving the body for three days came, Swami went into the interview room. There, He made a revelation that literally left the students, Divij Desai and Harish Krishan. dumbstruck.

Click to read complete article »
Posted by Aravind Balasubramanya at 7:43 am 36 comments: 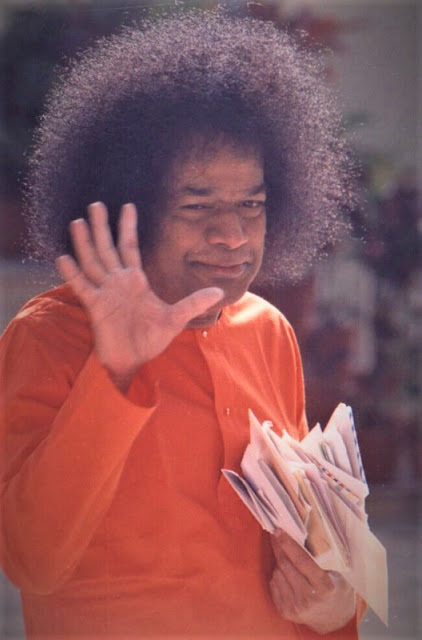 Everyone faces criticism. Even the Gods themselves are not spared of criticism. But then, how one faces the criticism determines what one becomes.That’s what the popular story of a donkey that fell in the well tells us. When the donkey fell in the well, it brayed out loud. To ‘bury’ the irritating sound, everyone came and threw mud into the well. The donkey however kept shrugging off the dirt from its body and did not allow itself to get buried under it. Finally, it made use of the mound of mud which had collected in the well to actually get out of the well! Criticism can be used constructively! In fact, ‘constructive criticism’ actually depends on the attitude of the one being criticised and not on the attitude of the one criticising.

Bhagawan Sri Sathya Sai Baba (Swami as He is reverentially and endearingly called) says,
“Let us say somebody has criticized you. You get angry/upset. When you get angry/upset, do not react immediately. Think to yourself,
‘Do I have in me the defects that have been pointed out by them? If in case, those defects are there in me, then, is it not my mistake to get angry/upset with them? However, if the blemishes pointed out by them are not present in me, then why should I get angry/upset with them?’
If you thus give an opportunity for such an enquiry and spend time in introspection, your anger will subside.” (From public discourse on 24th May 1992)

Swami, in that same discourse, gives a personal example to make it clear.
“When people call Me Buttatala Sai Baba (Sai Baba with a basket-like head), it may seem insulting. But, I do have a basket-like head! Therefore, I must accept this is true. But if they call Me Pattatala Sai Baba (Sai Baba with a bald head), then this is not true; so why I should I accept it? Therefore, if blemishes that are not there in me are mentioned right in front of me, even then I will not accept it. That is the right kind of determination. You must have self-confidence.”
Extrapolating the same logic, if the criticism is only partially true, one can accept (and correct if necessary) that part alone, letting go of the rest.

In a public discourse during the annual Summer Course in Indian Culture and Spirituality held at Bangalore in 1990, Swami said,
“Saint Tukaram had good feelings and so, he gave a favourable interpretation to even the rude and negative behaviour of his wife. His senses did not stand in the way of his spiritual progress and equanimity, despite trying circumstances in his family. Likewise, Sant Kabir was always engaged in remembrance of God. So his wife’s behaviour was harmonious and conducive to his spiritual advancement, Einstein, too, had the quality of equanimity in him and was therefore not at all upset by the boisterous behaviour of his wife. From all these instances, it is evident that what you need to do is to harmonise your own thoughts and feelings through proper sadhana (spiritual discipline), rather than blame the environment or other persons for your shortcomings.”
Well, that sums it all up and highlights the truth that whether criticism is constructive or destructive depends on the attitude and sadhana of the one facing criticism.

For many Sai-devotees (and I presume it is the case for devotees/followers of other Gurus/Masters as well), there is one criticism that is hard to overcome - the criticism of one’s Master/Guru/God/Religion. I remember how my blood has boiled whenever I have read heavily concocted and hastily written articles on my Swami by half-baked journalists whose sole goal seems to be capturing eyeballs at any cost. There are also some people on the internet (I will not name them and pollute my blog or the readers’ minds) who make ad-money and build a reputation for themselves by specifically targeting Swami using hook or crook (mostly crook). They doctor images, quote media out of context and spit venom camouflaging it as scientific journalism. And I get angry and upset. I can possibly learn to stand criticism when it concerns me but when a being that I have personally experienced for two decades to be an epitome of love, sacrifice and selflessness is unfairly criticised, righteous anger wells up within. It is almost like I am unable to bear it if someone unfairly abuses my father or mother! What should I do then?

Prof. Nanjundaiah’s experience with Swami regarding this is very enlightening and liberating.

Click to read complete article »
Posted by Aravind Balasubramanya at 8:46 am 18 comments: