An impromptu interview with Swami
It was the Indian summer of 1980 in Bangalore. T. Ravikumar, a student in the final year of his postgraduation (MSc), stood outside a bungalow in Brindavan, Whitefield. The vacation had just begun and he had done what he used to do during any holiday - rush to be with his Divine Mother, Guru and God, Bhagawan Sri Sathya Sai Baba. He was standing in front of the bungalow where his Swami was. That was when he received a message that he was being called inside.
He entered the first room of the bungalow and saw that Swami was there with some bureaucrats and officials. Without pondering over who the others were, Ravikumar focused his eyes and attention completely on the goal of his life - Swami. A smile came on his lips and joy filled his heart to the brim. Swami’s darshan always did this to him and it was his thirst for this joy that made him rush to wherever Swami was whenever he got the opportunity. Swami looked and him and asked,
“How come you are here?”
“Swami, the vacation has started and so I came here.”
“Why did you come here?”
“To have your darshan Swami...”
“Why do you want to have darshan?”
“...because it gives me bliss Swami... “
The others in the room were silently witnessing this interaction between the Chancellor of a University and His student. It was akin to an interaction between the Chancellor of the Universe and His devotee. Swami did not stop His line of questioning. He continued,
“Is it bliss or happiness?”
“It is bliss Swami...”
“What is the difference (between happiness and bliss)?”
“Swami, happiness is temporary only. Bliss sustains and grows on me...”
There was silence all around and everyone seemed to be listening keenly to Ravikumar. Ravikumar felt the need to elaborate.
“Swami, suppose I eat a Gulab Jamun (similar to a sweet dumpling) today. Ten years later, when I am hungry and don’t have a Gulab Jamun, the memory of eating it a decade ago will not appease me. In fact, the memory will enhance my feeling of lack and make me feel sad that I don’t have a Gulab Jamun now. Today, Swami is talking to me. If ten years from now, I am in a situation where Swami is not talking to me, I can recollect these beautiful moments and feel the same joy. At such a time, the joy will, in fact, be greater. The joy will never recede and will only grow whenever I think of it. That is why it is bliss - ever growing and never declining.”

A broad smile blossomed on Swami’s face and His eyebrows raised in appreciation. He turned around to the others who had gathered in the room and said that Ravi (that is how Swami calls him) has an answer for everything.


Thoughts on happiness
Isn’t that such a real fact? Its not just the growing joy you get when you recollect moments with Divinity, that joy grows on others as well. I have seen that magic happening and that is what inspires me to keep writing and sharing experiences and memories with Swami. I have personally found that, when it comes to Swami, sharing others’ experiences also is as joyous as sharing my own. No wonder that Swami promised me greater joy and more experiences if I shared what I received from Him - because sharing is caring and sharing increases the joy.
In fact, this ‘growing joy’ is the basis for conducting satsanghs, study circles, Bhagawatha Saptahams (a week long study of the Bhagawatham which abounds in stories of Lord Krishna) and the like. When the Bhagawatha Saptaham was held in Prasanthi Nilayam in March 2010, I thought that I wouldn’t attend the 4-hour sessions daily because I knew most of the stories of Lord Krishna. However, I ended up sitting through most of the sessions because the stories were mesmerising even though I knew them already.
Happiness, indeed, lies in union with God.
“But hey! Wait a minute! When memories of Swami flood me, I feel very sad. I wish He hadn’t left the Physical. I long to see Him in the physical. So, the stories of the glories of Swami only make me miss Him more and feel low and sad.”
That is a valid complaint. And it seems to beg to differ from the ‘happiness is union with God’ statement. So, isn’t the result of union with God happiness always? Why does it get sadness then - at times?
The simple answer that my heart provided is this:
There is happiness only in ‘union’ with God - not ‘separation’ from God. So, whenever thoughts of Swami make me feel one with Him, they make me happy. Whenever any thoughts make me feel separate from Swami, they take me away from happiness.

(Even as I type this, my mail inbox gets a ping. There is a new message in the inbox. I open it. It is from a certain Zahra. The person says, among other things:
“Your articles bring tears of Joy in my eyes and they stirs my heart, somehow with Sai's Grace, I feel deeply the moments you were/are in His present as though I was there with all of you; it is His blessing to me indeed... I look forward to reading more of your reminisces with Swami... Oops! ‘Reminisce’ is a wrong word because it’s meaning implies that we rely on memory; with Swami He is ever present with or without the memory box being activated.”


I am convinced that this is Swami’s way of telling me that my ‘conclusion’ here is correct.)
Perfect and practical definition for bliss
Ravikumar's answer was definitely inspired by Swami. He himself concedes that,
“Swami was so happy with the answer I gave. But I know for sure that it was not an answer I came up with. I am grateful for the opportunity to be the instrument through which the answer came.”
In that case, the answer came when Swami put the question to a student. What would have been the answer if a student had put that very same question to Swami? The good news is that there was definitely an instance when a student, Sri.Sanjay Mahalingam, put that question to Swami. Swami’s answer, as always, is so simple, lucid and deep. When asked for the difference between ‘happiness’ and ‘bliss’, Swami simply said,
“Causeless happiness is bliss.”
(This is a mantra that should be etched in our hearts.)
Bliss is something that should be beyond the reach of ‘cause’ and ‘effect’. Any happiness that has a ‘cause’ cannot be a lasting one; it cannot be bliss. This gives us a practical thumb-rule to see whether we are experiencing ‘happiness’ or ‘bliss’. Whenever we are happy, we just have to ask ourselves,
“Why am I happy?”
If we are able to answer that question, know for sure that the happiness is not of the permanent type. Lovely thumb-rule isn’t it?
This further means that to be ‘causelessly’ happy, one has to just ‘BE’ happy - experience the joy in just ‘being’. For that, one also needs to be constantly AWARE of one’s ‘BEING’. “Being’ and ‘Awareness’ leads to bliss. That is what is called as  Sath (Being) - Chit (Awareness) - Ananda (Bliss). When one is in this Satchitananda always, one is in union with God. How do I say that? ‘Coincidentally’ , it is there in the words themselves:
Being Awareness Bliss Always  = BABA = Union with God.
Lovely right? 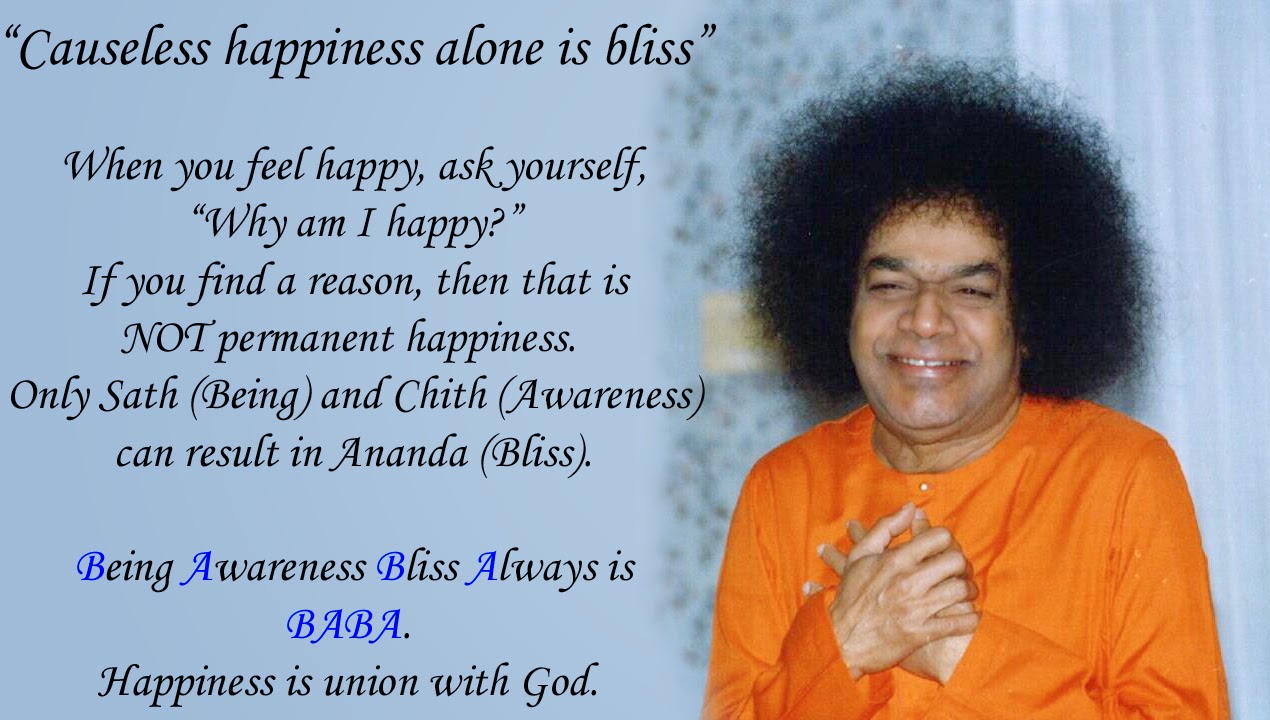 If you enjoyed reading this, you might also enjoy the following:

1. "You find God during the silence in between" - Sri Sathya Sai's insight and a short story for the pursuit of happiness

3. Life's greatest secret explained simply: What you hold within is what you get

(If you enjoyed this and wish to subscribe to this blog, please go to the right hand side and choose the last 'box' which says subscribe. Also explore the many 'previous articles' listed month-wise on the top right here, in the web version of the blog. Another blog which I maintain with more than 230 articles on it is at http://aravindb1982.hubpages.com. If you wish to be added to my mailing list, please email me via this page with the subject "ADD ME TO MAILING LIST".)

Posted by Aravind Balasubramanya at 7:35 am