The best gift to seek from God


It was sometime in the year 1994 or 1995. All the students in the Institute boys’ hostel were excited. Swami, as they lovingly called Sri Sathya Sai Baba, had agreed to grant them all a “PC session.” The term PC stands for “Poorna Chandra”, the auditorium (one of the largest pillarless ones in Asia) at Prasanthi Nilayam ashram. The PC session, like the Trayee session, was a special session which Swami granted only for the students and teachers of the University. And just like in the Trayee session, many interesting things would happen in a PC session and Swami would speak ‘informally’.

That PC session turned out to be unforgettable in terms of the lessons it provided.

As the boys entered the auditorium, they saw multiple piles of so many things heaped up. They quickly took their places to sit on the carpets spread on the floor. And then began the excited talk. Apparently, Swami had decided to gift all the boys with something. Everyone was discussing about what the gifts probably might be.

Swami arrived on the dais and there was a hush that fell on the entire gathering. He gently glided to the end of the stage and descended. Moving to the first pile, He picked up the first thing that His hand could get hold of and threw it to the boy nearby. It was a canister of shaving foam. Then, He summoned some boys and told them to simply give away one each of the items to all the boys gathered.

The heaps of objects turned out to be toiletries and each boy was getting something at total random. While one got a toothbrush, one got a shampoo while yet another got a deodorant stick. The ‘luckier’ ones got perfume bottles and electric shavers. Within moments, the silence was gone and there was loud murmur that developed in the auditorium as each student looked at what the other got and compared gifts.

Naturally, those that got ‘mere toothbrushes’ envied those that got the electric shavers. But those boys too were not free of envy - they longed for the perfumes. It was not as if those that got perfumes were happy. The bottles were only 100 ml and would soon get exhausted. So, they had gifts which they could not use if they wanted to preserve the memory. In short, though all were happy in some way or the other, all were sad too in a way!

The motive behind seeking

In the song celestial, Bhagawad Gita, which Lord Krishna delivered on the battlefield to Arjuna and, through him, to the entire humanity, there is a single verse which describes four types of seekers of God. (16th sloka in the 7th chapter).

It translates into this as Krishna tells Arjuna,
“Oh best among Bharatas! Four types of people of virtuous deeds worship me. They are:
1. the one who is grieved/ is suffering,
2. the one who desires worldly things,
3. the one who seeks intellectual insights/knowledge and
4. the man of wisdom/intuition.”

Of the four types of seekers delineated by Lord Krishna three of them, have “desire” as a driving force for their worship. Even the one who seeks knowledge has a ‘desire’. The Jnani (man of wisdom) seeks nothing and is truly desire-less.

Till I heard the conclusion of the incident at the Poornachandra session, this whole shloka for me, was just a classification of ‘devotees’. The culmination of the incident made me realize that a true 'devotee' is ONLY the one belonging to the fourth category!

When desires cloud the mind and we fail to 'see' God

Meanwhile, in the PC session, minutes passed and the comparisons simply went on and on. Suddenly, a few finger snaps were heard. This was the way the students would indicate to each other that something was happening that required everyone’s attention. As all the boys looked up and away from their comparisons and bickering, they saw that Swami was back on the dais. He was slowly moving back to His residence. When He saw that everything had suddenly become quiet and all were looking at Him, He asked,
“Have everyone got the gifts?”
“Yes Swami...”

Then, He paused for a moment before asking,
“Now tell me, who among you actually wants Swami?”
And with that, He turned around and walked back into His residence. There was just a stunned silence that was left behind.

Here is a question that each one must ask ourselves -
“Am I forgetting God because I am comparing and bickering about ‘toiletries’ which have also been gifted by Him only?”

It does not matter whether it is just a ‘toothbrush’ that God has gifted us in life. And it is not that the one awarded with a ‘perfume’ is any special to God. Whether it is a ‘toothbrush’ or a ‘perfume’ it is a gift from God - a gift that has been given with love. But the gift should never become so important that the one giving the gifts is forgotten. Sadly, that is exactly what happens because we are lost in comparisons and complaints about gifts received (or not received).

What should we seek in life?

The more that things have been delivered to us, the more we have sought. And the cycle of asking-receiving-asking never seems to cease. That is the reason why it has been said that the poorest man is not one who has little but one who craves more! And the richest is he who has contentment. There are many wonderful examples of people who have “everything” that life can give and yet they choose not to enjoy the same because they know that it is not true happiness. 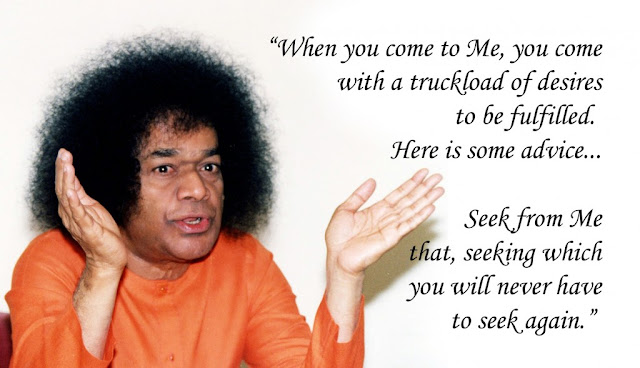 In the beginning, a choice is offered,
“Choose between God and the world.”
Actually, there is a secret here. Choosing the world, one gets nothing - no happiness. Choosing God, one gets everything - all happiness.

Yes! The “worldly” kind too!! Don’t you agree? I definitely do because that has been my personal experience in life. On a concluding note, I remember how Swami would often show His empty palm and ask,
"What is in here?"
"Nothing Swami..."
"No! There is everything here. The world you consider as everything is actually nothing."

That is definitely a thought to ponder about.

For all the readers:
(If you enjoyed this and wish to subscribe to this blog, please go to the right hand side and choose the last 'box' which says subscribe. There are hundreds of other articles in this blog too. Please have a look at them. Another blog which I maintain with more than 180 articles on it is at http://aravindb1982.hubpages.com.

Else, if you wish to be added to my mailing list, please email me via this page with the subject "ADD ME TO MAILING LIST". (You will typically get 2 mails a week about latest blogs and vlogs)
Also, use the Tweet, G+ and FB buttons below here liberally to share with your friends and family!

Posted by Aravind Balasubramanya at 7:32 am